CBD for Skin Care: What Can It Do For You?

Depression has been in the news a lot lately, with the unfortunate deaths of high well known celebrities like Anthony Bourdaine and Kate Spade. In fact, the CDC reports that depression is now the 10th leading cause of death in the United States. Depression is an extremely common illness that affects one in 15 people each year, and an estimated one in six people at some time in their life (according to American Psychiatric Association). It can be an incredibly debilitating illness, as anyone who has experienced it, or had a loved one do so, will agree.

Although there is no known permanent cure for depression, there are many ways to alleviate the symptoms and improve the sufferer’s situation. Like many medications that treat depression, CBD is only intended to help lessen the burden of depression and improve your emotional and psychological state.

Depression is an illness to which some people are genetically predisposed, while others may experience it following a tragic event or trauma. Whatever the cause, the symptoms are always the same: fatigue, loss of interest in activities, loss of appetite, trouble sleeping or oversleeping, change in weight, lethargy, and more.

Although the cause of depression is still widely debated in the scientific community, it is believed that it’s exacerbated by a chemical imbalance in the brain. The levels of neurotransmitters are noticeably reduced in our brain during depression, though this is seen as a symptom rather than a cause.

What Can CBD Do For Depression?

SSRIs (Selective Serotonin Reuptake Inhibitors) are a common form of medication for depression and anxiety. As the name suggests, they are used to rebalance the chemicals in the brain, particularly serotonin. They increase the levels of serotonin in the brain, thereby increasing the transmission of serotonin signals between cells, which potentially reduces the symptoms of depression and anxiety. However, SSRIs also have a long list of dangerous side effects and potential adverse reactions (one of which can be suicidal thoughts!). So, people have begun seeking out more natural treatments, free of dangerous side effects and toxic chemicals.

CBD has also been shown to improve signaling between receptors. A study in Spain performed on animals showed that CBD can increase the transmissions of the serotonin receptor 5-HT1A and may actually affect serotonin faster and more effectively than SSRIs.

Furthermore, stress can be a major cause of depression and cannabis has been shown to alleviate stress levels and to balance moods. One study revealed that the THC found in CBD can change the way people perceive negative images and stressors by triggering the endocannabinoid system in the brain, a system which is affected when someone receives cannabis and CBD.

The hippocampus is a major part of the brain that impacts many functions, primarily cognitive thinking and memory. Brain scans of patients with depression typically find a smaller hippocampus. This has been attributed as an important symptom of depression and as such, stimulation of neurons in this region of the brain has been found to be highly productive in the treatment of depressive disorders.

A study done on mice found that regular and regulated consumption of CBD can help to regenerate neurons in the hippocampus, thus helping to alleviate the symptoms of depression and anxiety. A comparison study also found that both SSRI and CBD can improve and stimulate neuron regeneration at similar rates.

It’s important to note that CBD as a treatment for depression is still a relatively new thing, and while early studies are extremely promising, you should always consult with your health care provider before changing to CBD as your primary treatment, especially if you are already taking any pharmaceuticals for treatment. Most of them require a gradual reduction in dosing over time in order to avoid dangerous adverse reactions and side effects. However, it is interesting to note that, while CBD seems to show similar potential benefits to those hoped for with SSRIs, CBD has not been proven to produce the adverse reactions or side effects of the SSRIs, nor does it require a tapering off of the dose upon cessation. 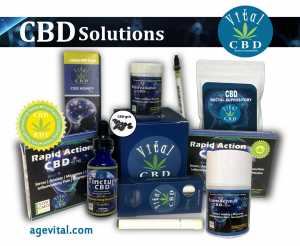 AgeVital has a full range of CBD products available for whatever situation you may need. VitalCBD Products range from traditional pills, to rapid action dissolving tablets, and even honey sticks and moisturisers. Not sure which is right for you? Give us a call or visit us in store and ask to talk to our pharmacist to find out what’s right for you!

5 Health Benefits of Vitamin B12