The Dangers of Artificial Sweeteners

Trillions of bacteria normally live in the human digestive tract. These bacteria and their human hosts have a symbiotic relationship: the bacteria help digest food, provide protection from disease, and improve immune functions. Without these bacteria, humans could not survive very long. Unfortunately, many people suffer from illnesses related to an imbalance of these gastrointestinal bacteria – illnesses which are caused by too many aggressive bacteria and too few defensive, “healthy” ones. Allergies, eczema, vaginal and urinary tract infections, diarrhea, inflammatory bowel disease and even depression are just a few of the medical conditions known to arise when unhealthy bacteria overgrow and outnumber the healthy ones in the human gastrointestinal system. Fortunately, probiotics provide an easy way to put things back into balance.

Probiotics are live microorganisms that, when administered in adequate amounts, provide a health benefit for the host. Probiotic bacteria favorably alter the balance of the intestinal microflora, inhibit the growth of harmful bacteria, promote good digestion, boost immune function and increase resistance to infection. People with flourishing intestinal colonies of beneficial bacteria are better equipped to fight the growth of disease-causing bacteria. Probiotics such as Lactobacilli and bifidobacteria maintain a healthy balance of intestinal flora by producing organic compounds lactic acid, hydrogen peroxide, and acetic acid that increase the acidity of the intestine and inhibit the reproduction of many harmful bacteria. Probiotic bacteria also produce substances called bacteriocins, which act as natural antibiotics to kill undesirable microorganisms.

That might be a lot to follow, but basically probiotics are keeping your intestines healthy, which enables your body to fight off the bacteria that makes you sick. Pretty cool. But earlier we mentioned probiotics helping your brain too, how does that happen?

It was once considered just a theory, that what you ate could influence your mood. But according to several recent studies, it’s true! A study, at Leiden University, researchers found support for the idea: they report that among 40 healthy subjects, those who had four weeks of probiotic treatment showed a decrease in negative thoughts and feelings. The subjects were either given a placebo, or a multi-strain probiotic every day for four weeks.

That’s not the only study that found the correlation though, another study, published in the journal Gastroenterology, divided 36 healthy women between the ages of 18 and 55 into three groups. One group ate yogurt containing a mix of several probiotics twice a day for four weeks, another consumed a dairy product that looked and tasted like yogurt but contained no probiotics, and the third group had no yogurt products.

After the four weeks the researchers conducted brain scans on the women, while administering an emotion-recognition test. They then compared the scans with ones taken before the trial. The results showed that the women who had eaten the yogurt with probiotics had a decrease in activity in the brain that controls emotion, cognition, and sensory feelings in response to the emotion-recognition test. Those who had no probiotics had an increase in activity, meaning they reacted more to the negative images.

Studies are still learning and discovering more about how probiotics can help with psychiatric conditions. Probiotics offer a wide range of health benefits, that can’t be understated. Balancing mood is just one of those. So, make sure your body is getting the probiotics it needs to keep you healthy!

When choosing probiotics, you want to be sure it’s a highly potent and diversified 14-species cocktail of probiotics for intestinal digestion and maintaining the overall immunity. And they must be refrigerated. 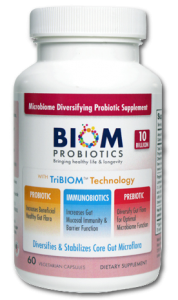 The human microbiota is the aggregate of microorganisms that resides on the surface and in deep layers of skin, in the saliva and oral mucosa, in the conjunctiva, and in the gastrointestinal tracts and the human microbiome refer to their genomes. The microbiome is reckoned to have around 3 million functional genes compared to human beings 23,000 and the far larger genome of the microbiome has correspondingly greater capabilities in modulating human health and well being. Microbiome’s health and diversity is a growing theme in medical research for treating autoimmune, infectious, and metabolic diseases.

We at AgeVital Pharmacy realize the enormous importance of human commensal microbiota. Our research and product development efforts are targeted towards harnessing the potential of microbiome for future personalized medicine and preventative care. Our newest line of Probiotics brings you the very best of the “good” bacteria, so you can get your microbiom on track and start feeling your very best!

5 Health Benefits of Vitamin B12